What the Beatles said about “The End”

JOHN 1980: "That’s Paul again, the unfinished song, right? Just a piece at the end. He had a line in it, (sings) ‘And in the end the love you take is equal to the love you make,’ which is a very cosmic, philosophical line– which again proves that if he wants to, he can think."

PAUL 1988: "Ringo would never do drum solos. He hated drummers who did lengthy drum solos. We all did. And when he joined the Beatles we said, ‘Ah, what about drum solos then?’ and he said, ‘I hate ’em!’ We said, ‘Great! We love you!’ And so he would never do them. But because of this medley I said, ‘Well, a token solo?’ and he really dug his heels in and didn’t want to do it. But after a little bit of gentle persuasion I said, ‘…it wouldn’t be Buddy Rich gone mad,’ because I think that’s what he didn’t want to do. … anyway we came to this compromise, it was a kind of a solo. I don’t think he’s done one since."

PAUL 1994: "We were looking for the end to an album, and ‘In the end the love you take is equal to the love you make’ just came into my head. I just recognized that would be a good end to an album. And it’s a good little thing to say– now and for all time, I think. I can’t think of anything much better as a philosophy, because all you need IS love. It still is what you need. There aint nothin’ better. So, you know, I’m very proud to be in the band that did that song, and that thought those thoughts, and encouraged other people to think them to help them get through little problems here and there. So uhh… We done good!!" 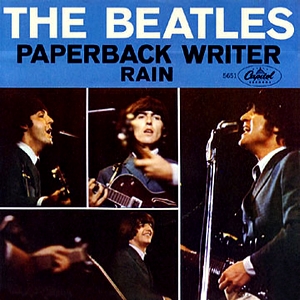 What the Beatles said about “Rain” JOHN 1966: “After we’d done the session on that particular song– it ended at about four […]

Published on 1967 Author: Lennon/McCartney Track 7 on “Magical Mystery Tour” What the Beatles said about “Hello, Goodbye” JOHN 1980: "That’s another […]