What the Beatles said about “I Wanna Be Your Man”

JOHN 1980: “‘I Wanna Be Your Man’ was a kind of lick Paul had– ‘I wanna be your lover, baby. I wanna be your man.’ I think we finished it off for the Stones. We were taken down to meet them at the club where they were playing in Richmond by Brian and some other guy. They wanted a song and we went to see what kind of stuff they did. Mick and Keith heard we had an unfinished song– Paul just had this bit and we needed another verse or something. We sort of played it roughly to them and they said, ‘Yeah, OK, that’s our style.’ But it was only really a lick, so Paul and I went off in the corner of the room and finished the song off while they were all still sitting there talking. We came back, and that’s how Mick and Keith got inspired to write… because, ‘Jesus, look at that. They just went in the corner and wrote it and came back!’ You know, right in front of their eyes we did it. So we gave it to them. It was a throw-away. The only two versions of the song were Ringo and the Rolling Stones. It shows how much importance we put on them. We weren’t going to give them anything great, right? I believe it was the Stones’ first record.”

PAUL 1984: “I wrote it for Ringo to do on one of the early albums. But we ended up giving it to the Stones. We met Mick and Keith in a taxi one day in Charing Cross Road and Mick said, ‘Have you got any songs?’ So we said, ‘Well, we just happen to have one with us!’ I think George had been instrumental in getting them their first record contract. We suggested them to Decca, ‘cuz Decca had blown it by refusing us, so they had tried to save face by asking George, ‘Know any other groups?’ He said, ‘Well, there is this group called the Stones.’ So that’s how they got their first contract. Anyway, John and I gave them maybe not their first record, but I think the first they got on the charts with. They don’t tell anybody about it these days; they prefer to be more ethnic. But you and I know the real truth.”

Info about “I Wanna Be Your Man”

“I Wanna Be Your Man” is a Lennon–McCartney-penned song first recorded and released as a single by the Rolling Stones, and then recorded by the Beatles. The song was primarily written by Paul McCartney, and finished by Lennon and McCartney in the corner of a Richmond club while Mick Jagger and Keith Richards were talking.

The Beatles’ version was sung by Ringo Starr and appeared on the group’s second UK album, With the Beatles, released 22 November 1963 and on the US release Meet the Beatles!, released on 20 January 1964. It was driven by a heavily tremoloed, open E-chord on a guitar played through a Vox AC30 amplifier. 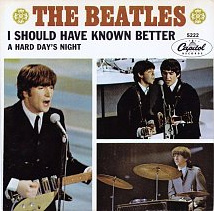 Published on 1967 Author: Lennon/McCartney Track 2 on “Magical Mystery Tour” What the Beatles said about “The Fool On The Hill” JOHN […]

One thought on ““I Wanna Be Your Man””